TL;DR: Simple vector dot products and cross products may be “undone” using formal methods consistent with Gibbsian vector algebra. Writing the cross product and dot product of an unknown vector relative to a given vector in a canonical form allows a well known vector identity to be used to isolate the unknown vector. Special cases immediately follow from the general solution. I argue that this should be included in introductory physics courses.

Let’s play a game. I’m thinking of an angle, and you get to guess what particular angle I have in mind. To strategically do so, consider what information about my angle you may ask of me. Recall from trigonometry that angles can be classified based on the quadrant in which they “live” in the Cartesian plane. Any angle is completely specified by its trigonometric sine and cosine. Both quantities are required to place an angle unambiguously into its correct quadrant. If you have an angle whose cosine is 0.5, that angle could lie in either the first or fourth quadrant and you have no hope of resolving the ambiguity without also knowing the angle’s sine. So to completely deduce my angle, you need to know both its sine and cosine. In other words, an angle’s sine and cosine act as constraints on the placement of the angle into its correct quadrant. I’m going to ignore the fact that you can add integer multiples of

indefinitely to keep getting new angles with the same sine and cosine. What’s the connection between this game and vectors? Read on to see.

Now, let’s change the game a bit. I’m now thinking of a vector, and you get to guess what particular vector I have in mind. What information do you need about my vector? Think geometrically. It may help to know the extent to which my vector is parallel to a given vector and the extent to which is it perpendicular to that same vector. If my vector and a given vector are parallel or antiparallel, their dot product will be nonzero and their cross product will be zero. If they are perpendicular, their dot product will vanish and their cross product will be nonzero. Furthermore, you know for any two vectors, their dot product is proportional to the cosine of the angle between the vectors’ directions. You also know the magnitude of their cross product is proportional to the sine of the angle between the vectors’ directions. An arbitrary vector is uniquely determined by both its dot product and cross product relative to another vector just as an arbitrary angle is uniquely determined by both its sine and cosine. Dot products and cross products, both relative to a given vector, can be used as constraints on each other, and this is the key to unwrapping them algebraically. In other words, this is the key to solving vector equations involving dot products and cross products. So we can now change this vector guessing game to be one in which I say I’m now thinking of a particular vector

whose “parallelness” to a given vector

(we can call it

) and whose “perpendicularness” to that same given vector

(we can call it

Now, let’s think algebraically. A general strategy for solving a vector equation for the unknown vector is to isolate the unknown vector by manipulating the equation as you would any algebraic equation, remembering that you can never divide by a vector and therefore you can’t unwrap dot products or cross products in the same way you would unwrap products of real numbers. You can divide by a real number of course, and a dot product is a real number so you can divide both sides of an equation by the same dot product. A cross product is a vector (for our purposes, anyway) and so you can never divide by one and there are no exceptions to this rule. So what do you do with cross products given that you can’t divide by them? The strategy is to somehow turn them into combinations of real numbers that can be manipulated as usual. You know one powerful tool that does this already: the BAC-CAB identity. It transforms two successive cross products into a linear combination of two vectors. It thus allows one or the other vector to be isolated algebraically. So the revised strategy may be articulated like this:

given its relationship to known vectors

expressed in a canonical form as

Now, focus on the cross product equation. We want to isolate

. Let’s operate on both sides of the cross product equation with

and see what happens. Follow the steps very carefully.

I will now subsequently refer to the expression in the final step of the above derivation as the main equation.

Now, there is so much mathematical and geometric goodness in the main equation that I think I could write an entire textbook chapter on it, and I have plans to do precisely that in the near future. Note that if we wanted to, we could replace

, but there is a reason I don’t do it here. Note that we can also just as well replace

and indeed there is a good pedagogical reason for doing so, so feel free to do it if you wish. Here’s why. In their algebra classes, students are traditionally taught to solve an equation by isolating the unknown. In introductory physics, we indeed often need to solve equations, but we must remember that students have previously done so only (usually) within the context of real numbers, not vectors. Proficiency of solving equations in which the variables represent real numbers does not automatically translate into proficiency of solving equations in which the variables represent vectors. Here, we see something students would never be allowed to get away with in an algebra class: the unknown

appears on both sides of the equation that is ostensibly the solution! The catch is to realize that it’s an illusion! It’s not

on the righthand side at all. It’s

), and these are not the same as

itself. As I explained in the previous post and in the guessing game scenario above, these quantities serve as geometric constraints on our unknown vector

. Our unknown is buried inside those constraints, but because it is not isolated we need not worry about seeing its symbol,

, on the righthand side of the main equation. Such is the nature of vector algebra compared to the algebra of real numbers. We need to point out, and students need to recognize and understand, this important distinction.

Now, I will point out as many interesting things about the main equation as I can think of, and believe me there’s a lot here to see. I was amazed at how much is here and is applicable to introductory physics. In introductory physics (e.g. when dealing with magnetic fields and magnetic forces), we usually like to constrain students to situations where all involved vectors are mutually perpendicular. Framed within the context of the main equation, this means

and the main equation reduces to

and there are two especially noteworthy points to make here. The first has to do with the

, which is the same as

, in the denominator. Why is it there? To answer this, realize that the magnitude of the righthand side must obviously be

as must also be true for the lefthand side. But the righthand side contains

. It seems obvious that one factor of

in the denominator turns

in the numerator into a unit vector, thus making its magnitude 1. But what about the other factor of

? This puzzled me for a very long time (over a year) until one day when it literally hit me like a rock! Honestly, it was one of those little epiphanies I long for and celebrate (and this one was no exception) but I also felt stupid (to quote our students) when I finally realized what was going on because it is now so obvious to me. The numerator contains a factor of

implicitly contains a factor of

, and we know this because it is explicitly stated in the equation we are ostensibly solving! VOILA! It’s just that simple! If you still can’t see this, take the magnitude of each side of the main equation (reduced as in this specific example). The righthand side will contain both

, and the latter contains

. It’s just that simple, but if you knew that all along then consider yourself among the elite readers who don’t need to read this blog (ha ha). As I said, I spent over a year thinking about this one issue, which may indeed indicate incompetence on my part, but I dare you to find it explained anywhere in the literature. Trust me; you won’t.

The second noteworthy point about this reduced solution has to do with the situation where all three vectors are unit vectors. Look at the following derivation: 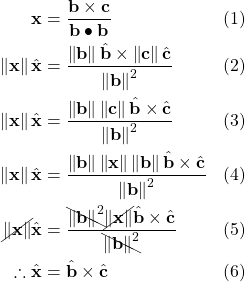 Here I have exploited another unsung pedagogical innovation in Chabay and Sherwood’s Matter & Interactions, namely writing a vector as the product of its magnitude and its direction (a unit vector). “Factoring” a vector into its magnitude and direction is especially helpful with cross products because it immediately makes the direction obvious. If you draw any three mutually perpendicular unit vectors that form a right handed triad and calculate the cross product of any two of them, you will always get the third unit vector. Most importantly, you can cyclically permute the three vectors (i.e. change the order in which they appear in the final step by letting each one become either the one immediately to its left or immediately to its right) and you will get two new true equations.

The overall strategy for solving for an unknown vector

can be summarized as follows:

I contend that this material can, and should, be introduced to students as early as possible if they plan on taking physics. There is nothing here that involves calculus to I assert that this approach to vectors can be used in both algebra-based and calculus-based physics since both ostensibly require students to have taken at least up to college level algebra and trigonometry. Adventurous mathematics faculty can also introduce this material into the traditional calculus sequence at whatever point vectors are encountered.

I don’t consider this post finished because I want to add a few more thoughts, but this work has consumed so much of my time I really needed the psychological satisfaction of getting it all written down. There may be inconsistencies in my logic and clarity in places, and I will continually revise with that in mind.

Here is an interactive GlowScript app, embedded with Trinket, that implements the material in this post. Feel free to change the known quantities and experiment. See if you can predict the solutions. Be sure to try cases where the vectors are mutually perpendicular.

As always, feedback is welcome.