TL;DR: The BAC-CAB vector identity is probably the most important vector identity, and has potentially important applications in introductory physics. I present six coordinate-free derivations of this identity. By “coordinate-free” I mean a derivation that doesn’t rely on any particular coordinate system, and one that relies on the inherent geometric relationships among the vectors involved.

for a long time. (Incidentally, we tell students to remember it as “BAC-CAB” but we rarely, if ever, write it that way.) The usual derivations involve either expanding both sides in Cartesian components and showing they are equal or using the Levi-Civita symbol and index notation to derive the identity. The former is tedious; the latter is elegant but lacks geometry. In my extensive web searches I stumbled onto a beautiful coordinate-free derivation cast in the language of differential forms. While I understand parts of it, I want to eventually completely understand it because it’s more along the lines of what I thought I was originally looking for, something analytical with not as much emphasis on geometry as the present derivation. Then I changed my mind and decided I wanted something based as much as possible on geometry after all, and I finally found several instead of just one.

Remember that I’m writing this as I would explain it to introductory physics students, so I will try to emphasize fine points that may otherwise go unnoticed. I assume the reader has previously been introduced to dot products and cross products. In future posts, I will address how to introduce these two concepts and I decided not to do that here.

Derivation I: A Derivation Based on Index Notation

I didn’t invent this derivation, which mixes tensor index notation and traditional symbolic notation, the Levi-Civita symbol, and explicitly includes basis vectors, which are usually left out of such derivations. I include them here anticipating future posts. In my opinion, this derivation is best described in these notes by Ben-Yaacov and Roig. It is efficient, but it is not geometric in nature. In fact, I think it inherently hides the underlying geometry but I also think it’s a valuable derivation to know.

Recall that in index notation, vectors are represented as components (coefficients) multiplying basis vectors, summed over all such pairs.

. The dot product of these two vectors would be notated as

. The cross product of these two vectors would be notated as

. The dot product of two orthonormal basis vectors would be notated as

. Finally, the cross product of two orthonormal basis vectors would be notated as

. For the purposes of this post, I will assume the reader is already familiar with the Levi-Civita symbol and its properties, the Einstein summation convention, and other aspects of index notation.

Here is the derivation. 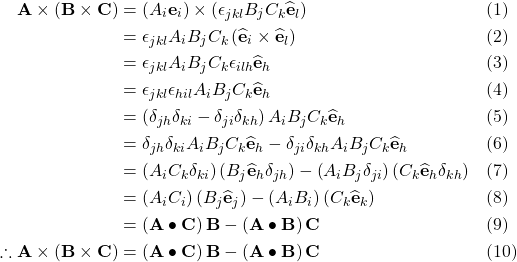 Here is a description for each step.

In preparation for more formal work in which dummy indices must occur in upper-lower pairs, one could rewrite this derivation to make the vector components have upper (contravariant) indices and the basis vectors have lower (covariant) indices, with appropriate adjustments to the Levi-Civita symbols’ indices. I may modify this post to reflect that sometime in the future.

I did not invent this derivation either. Indeed I found it here, which is part of a much larger online text. It is sufficiently clever that I think it should be more widely seen and I use to think it would be appropriate for an introductory physics courses (provided vectors are introduced more carefully than usual, with an extreme emphasis on coordinate-free geometry) but now I’m not so sure because I’ve run into a problem with it. Nevertheless, several aspects of the derivation pique my interest.

Because this derivation is inherently geometric, I think it is best presented operationally, as a sequence of steps that can be carried out either on paper or better yet in VPython or GlowScript. I will come back and add links to either a GlowScript or Trinket app that illustrates the derivation.

Here is the derivation, which assumes no two vectors are collinear. As in the previous derivation, I will show the mathematical steps first and then the corresponding description. For clarity, I show many more intermediate steps than the original source shows.

This derivation gave me a lot of difficulty initially. For some reason, I got it into my head that

had both the same magnitude and direction as

when actually the two only have the same direction. I don’t know how many hours I wasted trying to reconcile the resulting discrepancies before I saw the error in my reasoning.

Derivation III: Another Derivation Based on Geometry

This derivation is also geometric in nature, but conceptually simpler than the previous derivation. It is slightly more algebraic than geometric though. I found it on pages 19 and 20 of this excellent textbook. In my printing, there is a typo in equation (8).

. This derivation rotates one of the vectors to exploit some geometry, and also exploits the properties of the mixed product (aka triple scalar product, an illogical name if ever there were one). This derivation could be modified to project

onto the plane containing the other two vectors, as in the previous derivation, but the authors chose not to do so. It is again assumed that no two vectors are collinear.

This derivation is important because it is found in the definitive vector analysis textbook, that of Wilson, which is based on Gibbs’ notes. Consisting of two parts, the first part establishes an identity used in the second part while the second part calculates the result as a linear combination of

To begin the first part, resolve

be the angle between 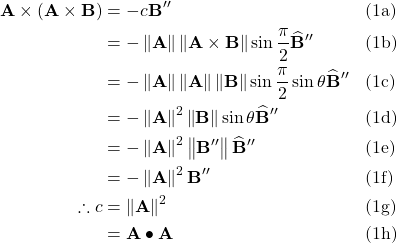 Now for the second part.

This derivation, also found in Wilson, is also due to Gibbs. It is very similar to the next deriation but I include it here for completeness. An essentially identical version is found on pages 7 and 8 of Tai’s excellent book.

This is the slickest derivation, but certainly but not the least geometric. It is coordinate-free and framed in the spirit of MTW’s approach and for that reason I think this should be the first derivation students see. It requires a slightly different approach to vectors, as you will see. Although it closely resembles the previous derivation, I will repeat those steps here using Tai’s notation.

Writing this post took the better part of four months, mostly because in the process of recreating the various derivations I stumbled onto some very interesting problems. In a corollary post to this one I will highlight one or more of these problems. I have looked at this post so many times that I probably have some existing typos and maybe even some notation errors. Just let me know if you find any and I will fix them. I also need to add annotations for derivations IV and V. I just really want to get this post published since it’s taken so long.

As always, feedback and comments are welcome.